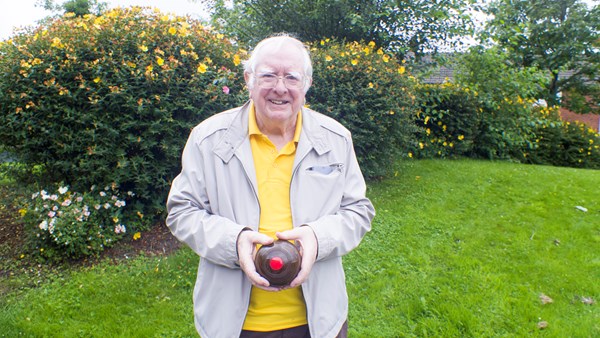 'I like to keep active so I can keep friendships going, take a trip with my grandkids, things like that.'

Ron always had what was known as a ‘weak chest.’ Even as a child, he was wheezy. Now in his 70s, he’s been diagnosed with COPD. It’s a condition that inflames the airways, making it hard to breathe.

Yet Ron still enjoys an active life. He likes to walk with his grandchildren. He loves playing crown bowls. He even uses tins of beans to do arm exercises!

If you’re living with a health condition, Ron has some good advice. “Being active is better for you, both physically and mentally. It’s safe for most people. Obviously, if you’re not sure, you should chat to you doctor.

“We’re not talking about jumping about or going down the gym. I just mean easy activity. Like taking a 10 minute walk each day. Or getting off the bus a stop early. Even just a bit of hoovering counts as activity in my book.”

According to Ron, the best type of exercise is when you don’t really realise you’re exercising.

“I’m not going down the gym with the muscle boys,” laughs Ron. “I do my arm exercises with a couple of tins of beans. It’s more fun than anything else. You’re doing it for yourself.

“It’s basically common sense. Nobody’s forcing you to do it. You just improvise. At home, you can go up and down the stairs a few times. Then take a break. If you do that each day, you slowly build up. You can also stand with your hands against the wall and do like a gentle press up, back and forward. It’s just little things to keep your strength up.”

Ron also recommends being active with other people. Before lockdown, he played friendly matches at Eton Bowling Club. The social aspect is as important as the game itself.

So, for people living with a health condition, it’s worth thinking about how to get active. What would suit you? Keeping your body moving can help your symptoms. It can also give your mind a break. That’s why activity is good for your physical health and mental wellbeing.

I like to keep active so I can keep friendships going, take a trip with my grandkids, things like that. To stay active, there are loads of little things you can do. You probably don’t even realise what you can do. But it’s not about other people telling you what to do. If you work out what it is you want to do – even if it’s just being able to get to the shops – then that’s great.”