“I walk because it gives me the energy to play games with my grandchildren.”

By Tom, 72, from Garston, Liverpool

Tom had been active in the past, but recent ill health really affected his ability to keep fit. After having a cardiac arrest, Tom was nervous about being active. As he recovered, he realised he needed to do something to make him feel better.

In October 2014, Tom had a cardiac arrest. A cardiac arrest happens when the heart suddenly stops pumping blood around the body. It’s very serious and unless immediately treated it can lead to death. As a result Tom had to stop doing any activity at all while he recovered.

After leaving hospital Tom started to build himself up by climbing up and down the stairs at home. This soon moved on to walking to the end of the road and back, gradually increasing the distance he walked each day, until he could do a longer distance comfortably.

It’s really important to Tom that he’s involved with his family can join in activities with them. With the help of his wife Julie and his four granddaughters and one grandson, Tom is now regularly walking around Liverpool’s parks, building himself up to jogging and even taking up ballroom dancing.

Tom wants to encourage others to move more, especially those who have a long-term health condition. It’s not about running a marathon or going to the gym five days a week. Simply taking small steps, like Tom, can make all the difference to your mental health and wellbeing.

“Being active makes you feel so much better for being active, I feel physically stronger and mentally more prepared to face everyday life. I get a good inner feeling when I have been active. It makes you more positive. It is easy to do nothing and just sit around feeling sorry for yourself.  But that does not help you in the long term. You need to do some activity, it can be hard to start, but once you get going it becomes easier and gradually you reap the benefits. You can start small and build it up to suit yourself. It can change your life!”

Leila started being active to help keep unnecessary weight off during pregnancy and to have an easier birth. Now she takes part in pregnancy fitness classes every week. This makes her feel more positive and energetic. 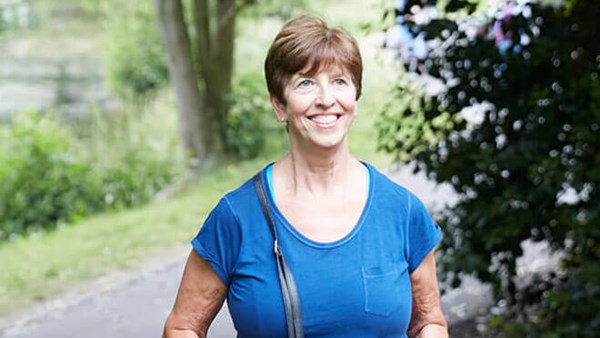 After experiencing a traumatic road accident, and then being diagnosed with blood cancer, Julie decided she needed to find a way to be more active that fitted her age and lifestyle. She’s also got three energetic granddaughters to look after, so she felt she needed to keep fit and active.

Phil never really thought of being active as something that was important to him until he became unwell. Now Phil walks and cycles regularly and completes a number of home activities that helped improve his physical and mental wellbeing.

Despite being registered blind, Carol doesn’t let anything stop her. She’s changed her life for the better by walking more, going to fitness classes and quitting smoking, which has helped her to lose weight and make new friends.